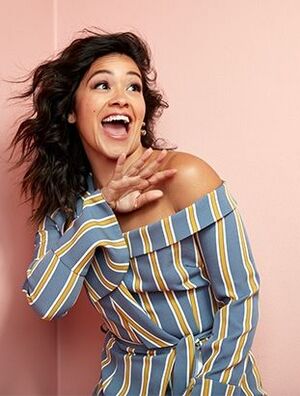 Zoe Martinez is a fun-loving young woman in Chantsville with a knack for sticking her nose into arcane matters. She battles demonic threats with a mix of luck, pluck, and sheer stylishness. Recently she took a demonic drug proffered by Ms. Osborn-Roch, with terrible results, and worked to thwart a rehearsal by a Twilight Orchestra cellist, with much more success. Zoe's day job is waitressing at the Vermillion Room Speakeasy.

Zoe is part of a loose team of monster-hunters including Damario Palomares, Milo, and Heathcliff.

Zoe was a PC in Alexi Sargeant's Sunset Kills game in November 2019, played by Eli Seitz.

In a Neitherworld where Nuevo Gauntlet City is part of Greater Mexico, a version of Zoe (named Noé) works as a taqueria employee and secret angellero, using her opossum shapeshifting to (sort of) help hunt predatory angels. She was frequently berated by fellow angellero Oscar for her antics, like playing possum, getting high while on missions, and flirting with dangerous angels.

This version of Zoe was a PC in Rich Rogers's Nahual game in September 2019, also played by Eli Seitz.