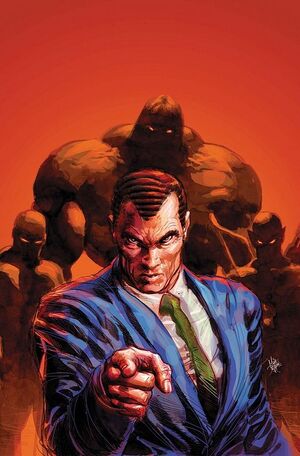 Xander Solomon was the CEO of Solomon Industries during WWII. His unethical business practices put him at odds with superheroes, despite his ostensible patriotic commitment to New Gauntlet City and the United States. He sponsored Solomon Munitions research by Dr. Anatos that resulted in Phantom Pain's ghostly condition.

In the crossover The Gauntleteer is Missing, he was behind the abduction of the Golden Age Gauntleteer. He sought to forge a new Gauntlet of his own and create a private army of "heroes," including the engineered soldiers of the Forward Guard and the "rehabilitated" Blitzkinder now known as the Thunder Patriots. He was thwarted by the Sound Park Protectors, who found the Gauntleteer and restored the memories of the city. Mr. Solomon was disgraced for his perfidy and ousted from Solomon Industries—which was taken over by his cousin Zephaniah Solomon.