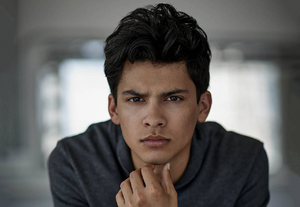 Victor Garcia is a teen superhero who was a member of Artemis & the Nobodies under the alias Void, working in conjunction with his older brother Alan or Null to form the superheroic duo Null & Void. The brothers were recruited to the team by Quetzalcoatl. He is an athletic Mexican-American boy who favours bright colours and loose shirts in his streetwear, and wears a form-fitting bodysuit in midnight blue/black speckled with reflective silver and a featureless helmet and mask in his guise as Void.

Victor was born as the younger of two sons to a Mexican-American family living in New Gauntlet City. A confident boy, he came out as gay when he was 12 and has been open and proud since. He was a skilled ice-skater, and competed in speed and figure skating, as well as playing for a hockey team. His parents - political activists who disapproved of costumed vigilantes - moved out of New Gauntlet City, but Victor and his brother Alan remained behind citing school and other commitments. They stayed with their abuela, who lived in an old rent-controlled apartment in Bellevue, which over the years had become the city's gay village.

Alan was an intern at Aeon Laboratories, and Victor was on a tour of the labs with him when they were caught in a freak accident involving a dimensional rift. They survived mostly unscathed, but first Alan and then Victor began exhibiting strange powers. They could absorb kinetic energy, and use it to greatly boost their own physical capabilities. They took on the masked aliases of Null and Void - Alan insisting they conceal their identities - and began to fight crime in Bellevue, when they were recruited by the hero Quetzalcoatl. They would try and maintain their normal lives - though Victor was forced to give up his beloved speed skating as he could no longer conceal his powers while doing so.

Played by David Morrison in a 2019 Masks game run by Ferret using the Joined playbook as a counterpart to a Janus.

Void's true powers are the ability to absorb and mimic the powers of other superheroes, as well as drain their power and vitality. Due to long-term partnership with Null, he has also permanently picked up his powers - the ability to absorb kinetic energy and use it to boost his own speed, strength and agility.