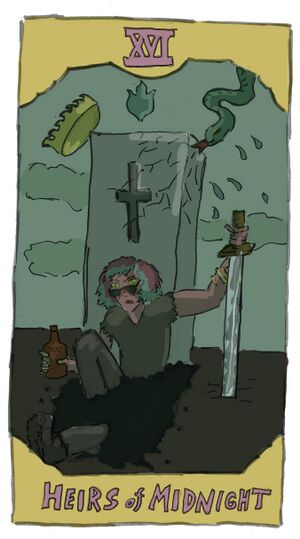 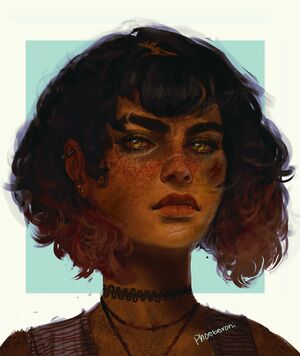 Valentine LeBeau was an accomplished hunter, descended from the legendary Odyei legacy of Maddie Midnight. She is a main character of the mature-readers comic series "Heirs of Midnight." Her brother, Silas LeBeau, follows the path of Odyei. Valentine, however, had become an adopted child to their ancient foe Ekidna, to Silas's great distress.

In the Narcosis Comics series "Ex Libris," sequel to "Coven Prime," Silas realizes his sister's long game. She is getting close to Ekidna, as only a child of Ekidna can slay Ekidna. Unfortunately, Valentine's heavy-handed security work for Councilwoman Elizabeth Morrow earn the wrath of werewolf Anna Kogotov. Anna first tries and fails to assassinate Valentine in Coven Prime, then returns to attack Valentine at Morrow's office in wolf form. This second battle ends with Anna killing Valentine. Afterwards, Silas carried Valentine's body to the underground, where he began to bargain with Ekidna to bring Valentine back.

In a later installment of "Ex Libris," Valentine appeared alive again, albeit with odd oracular abilities and snake-like eyes. Silas admitted he wondered sometimes whether the real Valentine had returned or whether Ekidna had tricked him, perhaps with an eidolon. The oracle Xania Treestop discovered the answer was both: Valentine was back, and Ekidna was playing Silas for a sap. The mother of monsters was not responsible for Valentine's resurrection!

Valentine LeBeau was originally an NPC, and later a PC in Jim Crocker's Coven Prime games of Urban Shadows. Her first PC appearance was in September 2019, when she was played by Leah Sargeant.