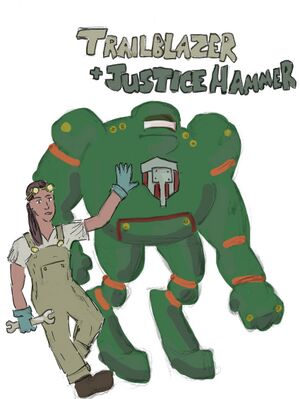 Trailblazer (Dezba Henry) was a brainy WWII-era superhero from a reservation near New Gauntlet City. She demonstrated a powerful intellect from a young age, particularly with languages and cryptography, and a sideline in robotics. Her signature invention was a suit of power armor she dubbed Justice Hammer. Her greatest shame was assisting her professor, Antonio Guiseppe, to learn about her tribal mythology, which he used to become the terrifying War Weaver Anaye of war. Dezba has tried to make amends by fighting for justice and the downtrodden, relying on her family's support and alliances with other young women heroes. She has built herself a sanctuary in Hanger 225, the original home of her plane Crazy Ivanna —which she bought before handing it over to the war effort. She has turned the hanger into a place to work on Justice Hammer.

Trailblazer was an occasional member of the Allied Angels, a team of young women who fought on the Gauntlet City homefront during World War II, in an extended series of Masks games run by Jim Crocker. Trailblazer was played by Ferret, and appeared all three sessions of the November 2019 series.