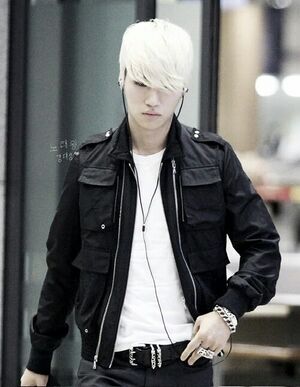 Yuan ap Balor (You-AHN AHH BAY-lore) is the half-fae adopted prodigy prince of the Fomorian Fae Court. While he is not the eldest of the children adopted or whelped by High King Balor and High Queen Cethlenn (SKILL-en) he is the most likely one to take the throne upon the completion of his Wylding. He is somewhat known throughout New Gauntlet City for being a legitimate faerie prince, something that drives several girls (and more than enough boys) wild when they also lay eyes upon such a creature. While gregarious and friendly, Yuan is beginning to think most humans have a thing for the fae.

Yuan was born to Baoling and Jin-Hua Zhang, a second generation Chinese-American family who were delighted to bring their son into the world and their family. The early years were good, however when Yuan was four they went to a carnival where the young lad found his way into the fae realms. Yuan was quickly snatched up by a bevy of Leanhuan Sidhe, faeries which feed on the utmost peaks of human emotion and was to be a delicacy for them to fatten as they saw fit. Yet Yuan didn't fit the mold of a captured emotion source as he refused to give them the highs and lows of human experience they fed off of. As the faeries grew more furious with him as time went on they began to do unspeakable things to him, maiming him in several ways. He was bent but never broken, standing firm against the Leanhaun.

His adoptive father High King Balor came to one of the Leanhuan parties where Yuan and a special blue unicorn were to be the gladiators of the day. When Balor placed his eye upon the boy, broken as he was, fighting to protect the unicorn he was taken by him and claimed them both as his rightful gifts for visitation. With the human boy in his possession Balor left for his kingdom and with the help of his wife and many craftspeople they were able to rebuild Yuan.

His missing eye was replaced with a beautiful one carved of star sapphire, his missing tendons replaced with silver sinew, his missing bones replaced with strong magic, and his missing left arm given one crafted of pure mythril to aid his travails. The blue unicorn he had saved was bonded to him as a Battle Brother and Yuan was adopted, taking the name of Balor as his own since he had long since forgotten his human last name.

Being forged in the faerie balefires changed Yuan forever, making him a true member of Faerie himself.

Played in a 2020 Masks games run by Rich Rogers. Played by Ferret.

When he turned sixteen Yuan ap Balor was allowed, nay, expected to go on a grand adventure to carve his name into a new world. His father and mother figured he'd go to the Leanhaun realm and wreak havoc upon them. To both their surprise (and horror) Yuan asked to go to Earth and see the sights as well as help out the heroes who resided there. Unable to deny his request his parents aided his exodus.

Upon breaching the veil between Fomorian lands and Earth, Yuan was called to the location he ended up at by the music of E Lane Sobcheck and burst into the battlefield ready to aid the side he saw as righteous. He spent his first week on Earth in detention and it was glorious! He ended it with a team of allies who would aid his endeavors upon this world, dubbing them the Hopefuls.

Yuan came upon Kelvin checking on another student, Yannos Farrin, who was being pushed into a locker. Having seen plenty of TV at this time Yuan ap Balor removed a glove and slapped Deimos across the cheek and demanded an after school duel to seek justice for Yannos. Garrison, Deimos' right hand man, also got in on the action and dragged Kelvin along for the ride. The day went along with E Lane and Tensile being let in on the actions and while Tensile did her levelheaded best to try and avert this conflict Yuan and Kelvin were firm in their idea that this was justice.

The fight, if you can call it that, ended with Deimos and Yuan being taken to the principal's office after just ONE punch was thrown.

Feeling guilty as Deimos acted like he had been wounded by Yuan's words more than his punches, Yuan made a rousing speech to try and bring a spark back into Deimos's eyes.

Speech: “I must say, child of Ares, that I hope my battle talk was not taken to heart. It was merely words to try and throw you off your game because I knew, even with my compatriot Kelvin, that the chance of victory against you was rather small. Your physique is beyond impressive while your fighting prowess was evident in how you carried yourself. If anything it was nerves on my part; please, realize your puissance is impeccable.”

After raising his enemy's spirits, Yuan survived a meeting with the principal. The next day, after realizing that only E Lane had an invitation to the upcoming party that weekend Yuan got fair and equitable advice from Tensile only to have his outlook twist it into a direction his poor team leader hadn't seen coming. Contacting his mother he got permission to use one of the Fomorian "Party Realms" for a weekend blast if he could would be a consort for his cousin or would find her a compatriot because she was visiting the realm that week. Skirting the issue Yuan brought Yannos in as a date for himself and allowed his unique partner Kelvin to be roped to his troublesome cousin.

When scouting a location that seemed to be empowering Kelvin the Hopefuls were attacked by robotic monkeys, one wielding a cold iron sword. Trying to brave his fears, Yuan ran to engage and was seriously wounded in the brawl. His newest power, eye lasers, accidentally struck his partner Kelvin, shattering Yuan's drive to fight. After the fight Yuan pushed himself to try and correct his mistake, ending in being led to E Lane's residence by Kelvin.

A mixture of magic, fear, and analgesics led to Yuan expounding upon his realm and people he was related to. All the while the mages could overhear the drunk fae gout his exposition.