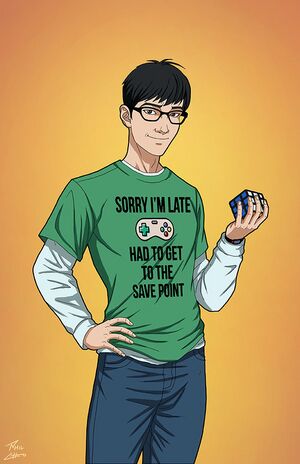 Junji Mori was amongst the groups of Japanese gang members that were sent to New Gauntlet City under a sinister plan to undermine...something. Junji wasn't sure what was going on, on his end the gang had been captured and listed as "degenerates" and slated for removal from Japanese society to keep the cultural zeitgeist pure. He and his came to New Gauntlet City and dumped into the world with limited understanding of English and what was going on. Junji and company slowly began to learn and stayed under the radar compared to other Yokai gangs, with Junji managing to gain a foothold in New Gauntlet City and the love of a nice guy. This came to be his undoing in his gang who turned on him for both being gay and slumming with a native.

The fight between the Yokai gang was only stopped when it reached Hollowed Park when Cryptid and Blue Rose stepped in to help. After finding out what started the fight they offered Junji a place in the Dead End Queens which he took gratefully.

Member of the Dead End Queens