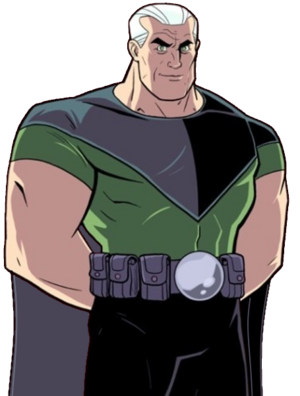 Superia is a super-villain who challenged the Legion of Valor. He was a hero when he first came into his powers, but the complexities of saving people and fighting villains eluded him. He was too violent, too quick to judge, and unforgiving.

Eventually, he killed a minor villain and was arrested by AEON for his crimes. He served a lengthy sentence in an off-world super-max prison, but escaped during a large jailbreak and returned to New Gauntlet City. Now, he does some work for hire as muscle, he hatches his own schemes to make some money. He's even dabbled in media, starring in a small run of a reality show about supers for hire.

Superia is immensely strong, can fly, and is nearly impervious to harm.

Superia is a man out of touch with the modern age. His values are antiquated and weren't wholesome when he was young. He's been described as "that uncle at a reunion that you just don't want to share his opinion". He's selfish and short-tempered, but he isn't outright evil. He can be reasoned with most times, but he has a superiority complex and feels like the world "owes him", and since he's immensely strong, it's hard for folks to say no to him.

Superia was created by James Stuart for his RPG Legacies.