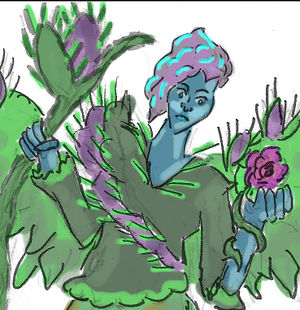 Princess Euphloria, aka Snapdragon, was a member of the Allied Angels, a team of young women who fought on the Gauntlet City homefront during World War II. The Princess hailed from the underground realm of Rynoom and boasted leafy wings, a powerful staff with the head of a carnivorous plant, and stunning pheromones. She came to the surface world seeking sunlight for her kingdom and a good time for herself. She received a potential suitor in Prince Dapperling of the mushroom people. During the Allied Angels' mission to Urucia, she discovered that the mushroom people had allied with the Nazis. Prince Dapperling explained that he had defected from his kingdom when they made this alliance. In her last known appearance, Euphloria was torn between returning to Rynoom and staying to help the surface world.

Snapdragon was a PC in Jim Crocker's Masks game in April 2019, played by Michael Mendoza.