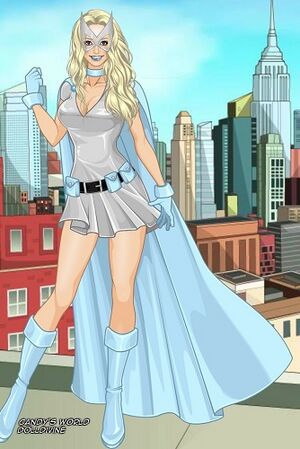 Sylvia Swanson, aka Silver Swan, was a member of the The First Guard & Allied Angels, a team of young women who fought on the Gauntlet City home front during World War II. Sylvia was the alleged niece (and secret daughter) of wealthy socialite Gloria Swanson—whose alter ego was the famed hero Golden Eagle. As Silver Swan, Sylvia served as Golden Eagle's sidekick and something of a poster child for American superheroes. She wielded fighting skills, weapons, and gadgets. On her first major mission alongside the Allied Angels, she was captured by Nazis in the small country of Urucia and was held prisoner by the Nazi's until being rescued by the teen Soviet hero Red Star.

The Birth of Silver Swan![edit]

Golden Eagle never intended to train Sylvia into becoming a crime fighter, but when Sylvia discovered her "Aunt's" Secret headquarters deep beneath their Estate, Sylvia gave Gloria little choice, as she could tell the willful child would go out on her own with little training, and likely get herself hurt. So the Silver Swan was born! Sylvia is also responsible for naming most of Golden Eagle's vehicles and headquarters. such as the OWL supercomputer, the Swanboat, the Raptor, the Grotto, and so much more!

While working alongside the Allied Angels, Sylvia grew increasingly worried that her partner, Golden Eagle, was nowhere to be found. When suspicions arose about a creeper of a scientist, Dr. Anatos, Silver Swan abandoned her team to sneak onto a government facility to get to the bottom of things! Sylvia knew she couldn't let Silver Swan be seen, so she took the costume of one of her captured rogues, The Blackbird, to sneak onto the facility to see what the skinny was!

Since then Sylvia ha been pulling triple duty in maintaining her civilian identity as Sylvia Swanson, operating as Silver Swan, and secretly working as Blackbird to thwart the mastermind of the secret cloning project!

The Atomic Engine of Eternal Darkness![edit]

During a battle with Doctor Atomica sometime in the 50s, Golden Eagle, Silver Swan, and Doctor Atomica all seemingly disappeared off the face of the Earth when the Atomica Engine exploded, only to reappear in the Modern era!

Silver Swan was a PC in Jim Crocker's Masks game in April 2019, played by Joe Zantek. She returned for Jim's June 2019 Masks game, continuing the story.