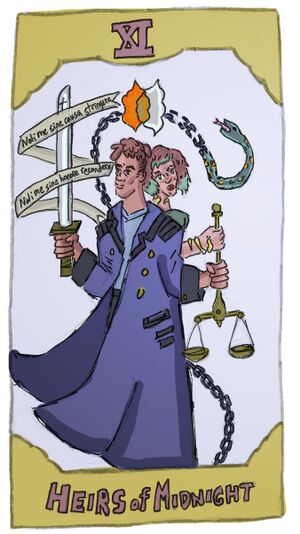 Silas LeBeau is a mortal hunter of monsters, descended from the legendary Odyei legacy of Maddie Midnight. He is a main character of the mature-readers comic series "Heirs of Midnight." Silas's sister, Valentine LeBeau, has turned aside from the path of Odyei and become an adopted child to their ancient foe Ekidna, to Silas's great distress. Now he is the last faithful bearer of the legacy left in the city.

In the Narcosis Comics series "Ex Libris," sequel to "Coven Prime," Silas investigates a number of shadowy rumors in the city, including the stolen volumes from the magical library, the unburied dead rising en masse, and the vampire impresario Vincent Brama running feral. He works more or less willingly with Anna Kogotov, Cam, Xania Treestop, Cenobia Palmiras, and Santiago. To gain information, he agrees to a date with the vampire Grizelda Alletante, new proprietor of Artery Nightclub.

In the "Ex Libris" finale, Silas takes a bullet for Valentine and is healed by Diamond Ford. He figures out that Valentine is working a long con to get close to Ekidna, as only a child of Ekidna can slay Ekidna. Then he helps Cam and Santiago free the fury-possessed DA Mia Burke. When last seen, he had discovered Anna had come back to kill Valentine, and was bringing Valentine's body to the underground to bargain with Ekidna.