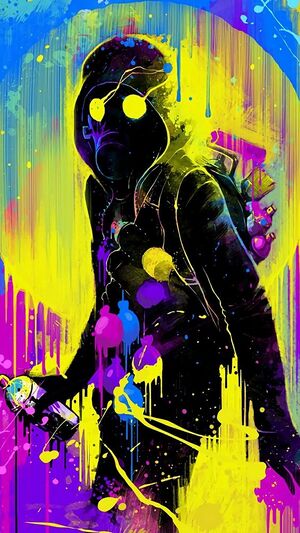 Veronica Lopez is an honour roll student at Lower Park's St Joseph's Catholic High School, where her father is the Principal. She provides access to school's the disused clocktower where the team meet to agree what to do about stuff. She pretty much stumbled into being a vigilante while out tagging walls with anarchic graffitti. She thinks she's brought a clear community motive to the group and is their 'thinker'. She is incredibly agile and no wall is too high to scale, no roof too slippery to traverse and no fire-escape to fragile to swing from, so she can get her gadget bag of paint bombs and tech gadgets anywhere in a hurry while accompanied by a rad soundtrack. However, her recent activites have brought he alter ego a little too close to her real-life for comfort: her best feriend Camilla is Blink's sister and she's carrying a torch for Mario 'Hoops' Hooper, High School basketball star and would be 'bad-boy'.

Played by David Walker in Alun R's series of hit the Streets: Defend the Block in March 2020.