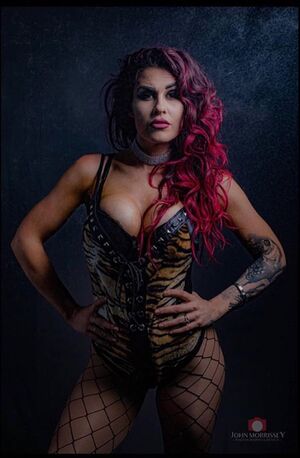 Sable Tigresa is a masked master thief persona adopted by Taynara "TayTay" Tavares, a professional wrestler with Pangalacatic Championship Wrestling. By day, she defends her title in the ring. By night, she moonlights as an uncatchable cat burglar.

Taynara was not the first Sable Tigresa, having inherited the mantle from a predecessor who was killed by Big Blue. Taynara entered The Celestial Tournament, but was actually there to steal the Sword of Legends from Mother Steel and give it to Emma Fortune of The House.

In the chaos occasioned by a conspiracy's attempt to blow up the Celestial Mountain, Taynara grappled off the Mountain with the stolen Sword of Legends and a conflicted Ghost Arm Disciple in her arms. The two teamed up down in New Gauntlet City to enter the House and steal from Emma Fortune.

Sable Tigresa was a PC played by Jo Crak in Alexi Sargeant’s Hearts of Wulin game in May 2020.