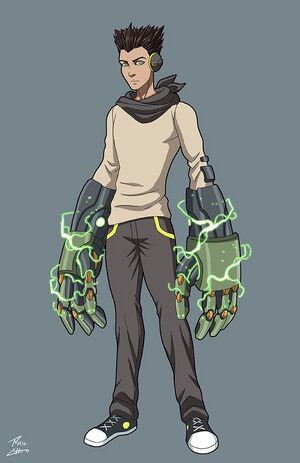 Rubble Rouser, aka Riley Rainer, is a kid from Undertaker's Row who attacked the AEON After-School Alliance for At-Risk Supers with telekinetic powers channeled through large mechanical gauntlets. He primarily created big hands or full golems out of gravel and debris. He perceived the AEON program's presence as an invasion of the neighborhood and a threat to local crime boss Mr. Hearse, a patron he looked up to with respect and fear.

When El Borron snagged one of the gauntlets, Rubble Rouser's powers flared out of control and began to knock down a building. Brightling held the building up and looked really good doing it, causing Rubble Rouser to develop a crush on her. The team learns a little more about Rubble Rouser's motivations and end up defending him from both Mr. Hearse's agent Corvid and the police of Precinct 13, suggesting instead that Rubble Rouser could be a new recruit to their AEON program.