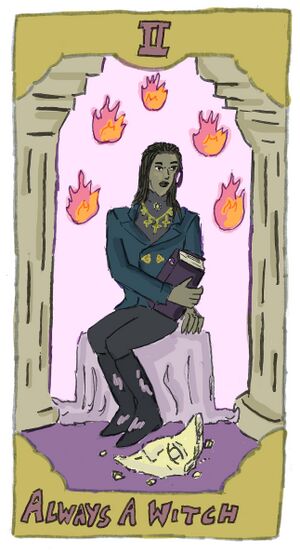 Rosalind McDonaugh is an immortal wizard and a star of the mature-readers comic series Always a Witch. Cursed to reincarnate endlessly until she finds true love, Rosalind has developed a jaded persona alongside expertise about the magical side of New Gauntlet City.

In the Narcosis Comics crossover event "Coven Prime," Rosalind aided Inspector Spectre, Anna Kogotov, and Jeremiah Hunt to uncover a plot against Coven Prime involving, among others, her nemeses the Witchhunters and the demon law firm Ozroch, Ozroch, & Ozroch. At the climax, Rosalind wrested the grimoire from the malefactors and helped cast a new spell to reconstitute Coven Prime. Offered a chance to become the Vigilant of Power, she turned it down and called in another favor from the besotted hedge-wizard Oliver Hedgewick, leading him to become the new Vigilant instead.

Rosalind later accepted a position with the city's magical library, and currently serves as its head curator.

Rosalind McDonaugh was a PC played by Misha B in Jim Crocker’s Urban Shadows game in February 2019.