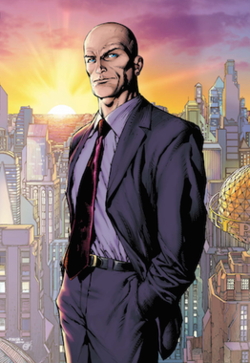 Rex is the owner of Midas Tech, a major corporation headquartered in New Gauntlet City. He hates aliens, especially Becky Betawave and Starborne. Due to his smarts, his money, and his connections, he never gets caught in his villainous schemes. Rex has a son named Kurisu, who he doted over for many years until they had a falling out. Kurisu recently proclaimed himself a superhero and took on the name Harbinger.

Rex was created by James Stuart for his RPG Legacies.