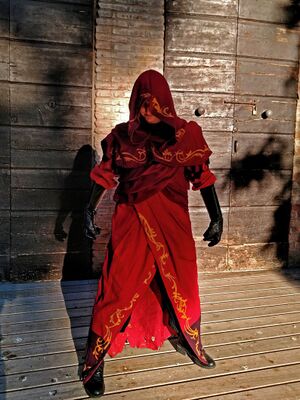 Clyde Correl, aka Red Robe, is a young hero and member of the Sound Park Protectors. He bears a powerful magical amulet that seems connected to the underground world of Kam'Mir.

Clyde received the amulet as a gift from his reporter father, who thought it was mere costume jewelry. The amulet "came alive" for Red Robe when his house caught fire, and he gained enough control of its powers to save his sister. The amulet gives him magical control of the physical world to an extent that is scary to Clyde. He created a set of rules for himself to govern its use after accidentally killing a neighbor's annoying pet dog. It also mantles him in flowing red robes and a hood that shadows his face.

As part of the Sound Park Protectors, Red Robe defended Sound Park from “Tornado Tom” Turner but destroyed a statue of The Gauntleteer in the process. He and his team were the only ones to remember the Gauntleteer when the hero went missing. Red Robe's amulet helped guide the team to the strange orb that contained the Gauntleteer, which he transmuted to wood in the process of reclaiming it. Red Robe and the team tried to figure out how to release the dangerous temporal energies inside the orb (after a false start where Red Robe released a small amount of energy straight down, causing massive destruction in Kam'Mir). Ultimately, Red Robe helped restore the Gauntleteer; held off an avenging army attacking from Kam'Mir; and defeated the culprit in the Gauntleteer's disappearance, Xander Solomon—but exposed his own secret identity to his father in the process.

In an epilogue, we see that Red Robe eventually travelled to Kam'Mir to learn from a sorceror-king how to use his amulet, and, as an old man in the Modern Age, still lives in New Gauntlet City and wears his amulet with (perhaps) more assurance.

Red Robe was a PC played by Brian L in Alexi Sargeant's June 2020 entry in The Gauntleteer is Missing crossover.