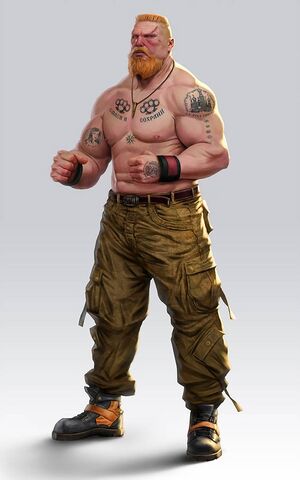 Red Bear, also known as Victor Ivanov, is a massive man hailing from Soviet Russia and a powerful (though eclectic) fighter. He was the protégé of Soviet android Iron Bear. He was sent by the KBI as his people's champion for The Celestial Tournament, where he encountered Moonlight Sonata, who was raised as his sister before defecting to the US under the influence of Agent Rockwell of AEON. Red Bear also spotted three individuals whom he considered future spouse material: Taynara, Ghost Arm Disciple, and Dancing Panther.

Red Bear bonded with Dancing Panther during the tournament, and in the end saved the Celestial Mountain itself from a massive explosive planted by a group of conspirators including Iron Bear, AEON, and Joseph Robertson Sound, Jr.. (Red Bear did this by fighting and defeating the bomb.) He left the Tournament by vaulting off the mountain to catch a plummeting Dancing Panther.

Much later, in the Modern Age, Red Bear became a mentor figure to Shadow Boxer.

Red Bear was a PC played by David Jay in Alexi Sargeant’s Hearts of Wulin game in May 2020.