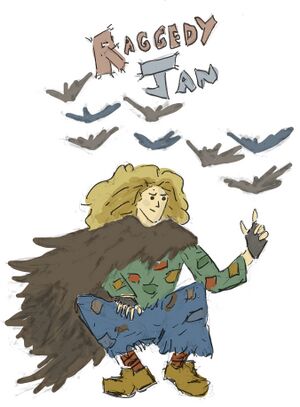 Raggedy Jan (Mary Annike Biroshka) is a superhero from Sherwood, one of the slums of New Gauntlet City. Like many other children in the slums, Jan become ill from toxic waste dumped by Solomon Munitions; unlike most, she not only survived, she developed superpowers, including illusion-casting abilities, a "shadow swarm" psychic attack, and occasional instances of psychic sensitivity. She makes her home in a forgotten, sealed-up room (accessible only through a ventilation shaft) in a warehouse which houses the Iron Fist, a communist newspaper. She has acquired a considerable stockpile of revolutionary literature and considers herself a protector of those left vulnerable by the injustices of capitalism. A large map of Gauntlet City, annotated with incidents of child abduction, corporate pollution, suspected secret laboratories, etc., hangs on one wall of her room.

She fought crime first as a member of the Allied Angels, and then later as the de facto leader of the Sound Park Protectors—a team she named after they helped to rescue The Gauntleteer.

Raggedy Jan was an occasional member of the Allied Angels, a team of young women who fought on the Gauntlet City homefront during World War II, in an extended series of Masks games run by Jim Crocker. Raggedy Jan was played by Steven desJardins, and appeared in one session of the June 2019 series and all three sessions of the November 2019 series. She is also a PC in Alexi Sargeant's June 2020 Masks: Golden No More series, part of the summer crossover The Gauntleteer is Missing. In this series, she had established herself as a cub reporter on the Iron Fist and drawn attention for her stories exposing wartime profiteering.