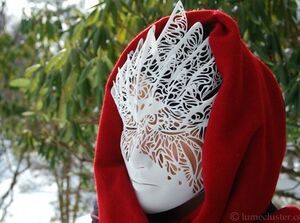 Quicksilver, aka Rashida Armstrong, is a masked hero and member of Batswarm (Team). She is very concerned with keeping her identity secret because her father is the crime boss Rashad Armstrong. She doesn't want to follow in his footsteps to run the family business. She has the powers of energy absorption and substance mimicry. Her dad doesn't know her identity and thinks of Quicksilver as a threat to his operations. Rashida's juggling "interning" for her father (running minor errands including delivering blackmail materials), hero work, keeping up in school, and working to keep her best friend Jamal away from both superheroics and criminality. Unfortunately, she hasn't been fully successful, as Jamal was last seen entering the offices of Ozroch, Ozroch, & Ozroch, hoping to make a deal for some powers.

Quicksilver was a PC in Alexi Sargeant's Masks game in May 2019, played by Misha B.