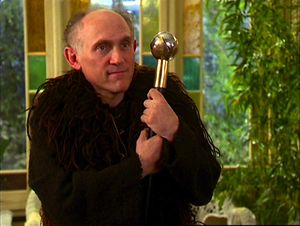 The Professor of Pregistration (*not* prestidigitation, which is a totally different thing) was a supervillain who used magic to commit crimes in the Bronze Age. He was an enemy of Calandra the Exiled.

In the modern era, the Professor of Predigistration works as a groundskeeper at the wizard school Hedgewick Academy, apparently as a rehabilitation program. He insisted on being addressed as "professor," still, even though he is technically not one. His grandson Coriander Tauris attends the school.

The Professor was created by James Stuart for his RPG Legacies.