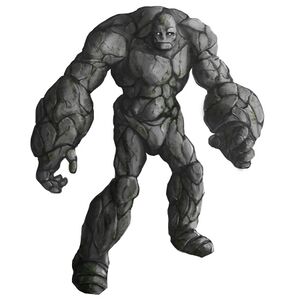 Pillar is a golem created "completely by accident" from stone, concrete, and other random bits of Gauntlet City by Morrigan after their break-up with Starborne. Though they kept each other company for a time, they quickly became too busy to answer all of Pillar's constant questions and left him to his own devices. After learning about superheroes for the first time after a run in with a lava monster, Pillar decided to become a superhero himself--choosing to become a "pillar" of society. He went on a few team-up adventures with Marshal Theodora and together they soon joined the AEON team with Harvester, Hashtag, and Kid Reactor. He was instrumental in helping Hashtag come to terms with her own destructive powers.

Later, Pillar learned of the existence of demigods and assumed that since he was "born" by someone calling themselves a god, that he was probably a demigod too. He moved into the Demigods mansion with Althea "Allie" Darden, Danny Moloka'i, and Colby Hikaru. He considers them (and all demigods) his siblings. While there, he helped create a new body for the centuries-old, sentient Antikythera mechanism, known as Tiki, and asked her out. They only went on a few dates before going their separate ways.

Really wants to find love, but isn't quite sure what that is yet

Has a deep voice and speaks slowly even when excited