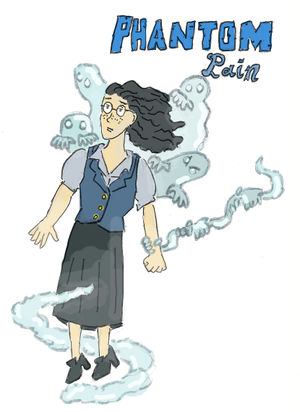 Kathleen MacKinnon, aka Phantom Pain, is a member of the Allied Angels, a team of young women who fought on the Gauntlet City homefront during World War II. Kathleen was caught between life and death when, upon visiting her mother at a Solomon Defense facility experimenting with ghost bullets, she survived a devastating explosion. Her mother disappeared, presumed dead. Kathleen was taken in by the sister who run St. Therese's School for Girls. In the meantime she discovered that whatever had happened to her in the explosion gave her a strange connection to the afterlife, with dark visions; ghostly powers of telekinesis, vitality absorption, and spectral transmutation; and the creepy Dr. Anatos intent on tracking her down. Overall, she was left with a sense of slowly-encroaching Doom.

Fortunately, Kathleen befriended the Allied Angels at St. Therese's and was welcomed onto their team, particularly by Silver Swan.

Phantom Pain clashed with Dr. Anatos on a number of occasions, eventually destroying his secret lab and discovering her own mother, similarly caught between life and death. Dr. Anatos and Kathleen's mom vanished into the ghost realm, grappling. Kathleen's Doom was forestalled, but she retained ghostly powers.

In the next phase of her heroic career, working with the Sound Park Protectors to rescue the missing Gauntleteer, Kathleen received warnings from ghosts of future, flowing back in time as the river of death was dammed up by a terrible calamity. Phantom Pain took on more of a devil-may-care attitude, but the mission hit home when she briefly changed places with her alternate self (a soldier in a land war against the invading Axis) and met that Phantom Pain's mother.

Phantom Pain was a PC in Jim Crocker's Masks game in June 2019, played by Leah Sargeant. She returned in Jim's November 2019 series, and then again in Alexi Sargeant's June 2020 entry in The Gauntleteer is Missing crossover.