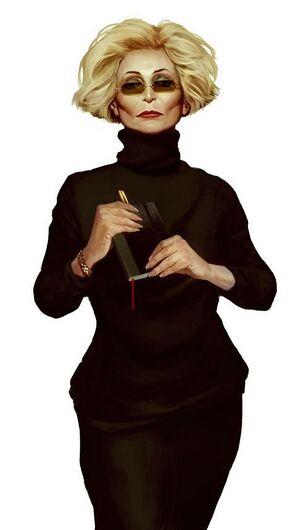 Ozroch is a demonic entity who entices mortal beings into contracts for services and aspects of their souls.

In its encounter with the Vigilants of Coven Prime in 1999, it took on a tripartate form, presenting itself as the three partners of law firm Ozroch, Ozroch, and Ozroch. It was thwarted in its attempt to gain control of Coven Prime, and forfeited its contract on the soul of Jeremiah Hunt in an attempt to end his mortal life.

Ozroch reappeared in the present day, manifesting as the lawyer Ms. Osborn-Roch, who pitched the young hero Mephista on helping to collect purpureous brimstone in the neighborhood of Undertaker's Row. Ozroch failed in an attempt to trickily acquire the soul of Mephista's mentor the Guardian Devil, but Mephista's teammate Moxy did sign a contract with them and become their demon-powered operative.

Ozroch attempted to supply a monster hunter in Chantsville by the name of Milo with a drug that would allow the young mage's body to be possessed by a demon. The demon desired to attend a ritual of the Twilight Orchestra in the body of a powerful wizard, but the demon drug was misdirected and ended up in Zoe Martinez and the demon's plans were ultimately foiled.

Most recently, a representative of Ozroch approached Noah Ford, who was experimenting with the Shroud of Mortality in the Forsaken Forest, offering to help him unlock his potential.