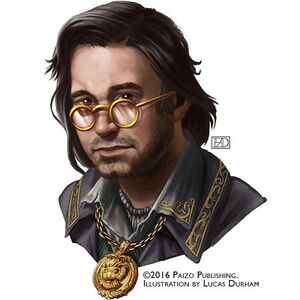 Oliver Hedgewick was a hedge wizard or warlock specializing in healing magic, frequently consulted by the immortal wizard Rosalind McDonaugh, whom he carried a torch for. The most important favor he ever did her was taking the role she shunned as Vigilant of Power for Coven Prime, the neutral gathering place for the supernatural denizens of New Gauntlet City.

With his enhanced status as Vigilant of Power, Hedgewick founded a boarding school for training young witches and wizards called Hedgewick Academy. He does his best to keep his students safe, without always being the most effective at it, as fifth-year students Adrementitia Grey, Noah Ford, Coriander Tauris, and Arsenius "Arsenic" Adebayo discovered during the incident when a dark wizard masqueraded as their charms professor, Mortigern Dunwiche.