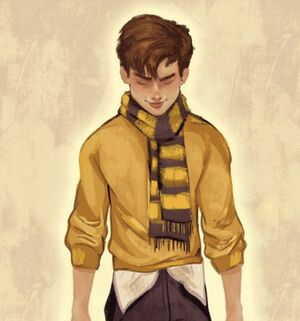 Noah is a fifth-year student of wizardry in House Burrowdown at Hedgewick Academy. He is born of a non-wizarding family, though his father was once a werewolf (heavily implied but not outright stated to be Lucas Ford, once of Anna Kogotov's pack). Noah is forthright and eager with an unconventional grasp on magic; he is close friends with Coriander Tauris.

In his fifth year at Hedgewick, Noah noticed a seeming time loop in charms class and told the teacher, Mortigern Dunwiche, who brought him to headmaster Oliver Hedgewick's office in Coven Prime. As it turned out, Mortigern had been replaced by an imposter. In the confusion at Coven Prime, Noah accidentally kept the Shroud of Mortality from Oliver's wall—something about it made him feel closer to his father. He also helped Coriander, Adrementitia Grey, and Arsenius "Arsenic" Adebayo foil Corvid's attempt to rob Hedgewick.

When last seen, Noah was experimenting with the Shroud of Mortality in the Forsaken Forest, when he was approached by a representative of Ozroch, Ozroch & Ozroch offering to help him unlock his potential.

Noah was a PC in Alexi Sargeant's Hogwarts RPG game in August 2019, played by Sarah J.