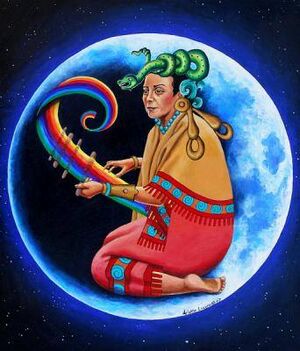 Ninapaqari is a member of an Incan pantheon/royal family and grandmother to Quorisipas “Cori” Si’Huallpa, aka Brightling. She believes Cori should return to her home in a secret mystical mountain lake in Peru and has worked to find her eligible deity suitors, including Taniwha (nicknamed "Sharkhead" by Cori's team) and Camazotz (nicknamed "Batswarm" by Cori's team, which then adopted Batswarm as their own team name). Ninapaqari was last seen watching in surprise as Cori proposed marriage to her teammate El Borron.