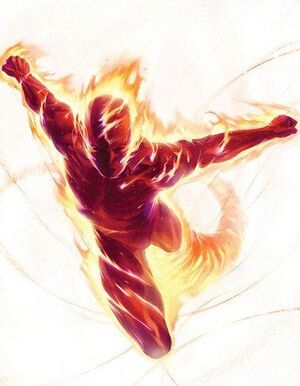 Nighbolt is Nova with elemental control. He can channel earth, water, air and his favorite fire. When he does channel an element his appearance turns to be a man-of-that-element.

Nightbolt is prone to anger and has slight superiority complex toward not-superpowered people.

Samuel is from Jamaica, his parents moved to Gauntlet City after he burned down their house when first manifesting his powers. His parents signed him up to a normal school here and look for someone to help Samuel control his powers and temper. Red Exorcist is helping Samuel to control his powers.

Origins of Samuel powers are unknown, he heard rumors that his grandfather had some powers, but nobody in the family wants to talk about it. Samuel first manifested his powers when he and his friend Bronco were smoking pot, the lighter didn't work and with just a simple though "man, I wish I could light that blunt with my mind" the entire kitchen was on fire.

Bronco is the friend of Samuel, he was first to also be wounded by Samuel powers (slight burns). His parents also moves to Gauntlet City and he keeps being Samuel friend, but now slightly more distant, as Samuel want s to spend more time with other super powered teens.