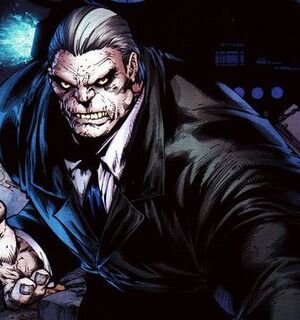 Mr. Hearse is a crime boss in Undertaker's Row. He is far larger and stronger than a normal human, with chalky white skin and a custom-tailored over-sized suit. When the AEON After-School Alliance for At-Risk Supers showed up in the Row to clean up graffiti and so forth, Mr. Hearse took this as trespassing on his territory. He had Corvid capture El Borron's parents to force the young hero to work for him, tasking him first with mimicking the properties of Mr. Hearse's purpureous brimstone cufflinks. El Borron and his team fought back, and Mr. Hearse got flung through a portal to hell by the demon-tainted hero Moxy.

Honey Badger is a young woman who had found purpose training to be a bodyguard for Mr. Hearse. She is now dedicated to finding a way to free him from the hell-realm he's been consigned to.

In Nuevo Gauntlet City, a version of Mr. Hearse named Señor Mortuorio was a narco boss assassinated by Oscar the Jaguar.