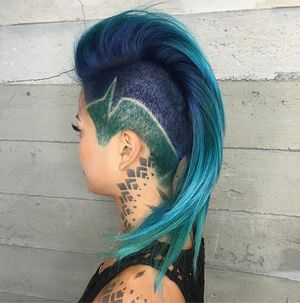 Moxy, aka Maxima Jones and "Joyless Princess," is a young woman who grew up with wealthy but distant parents whose teenage angst boiled over into superpowers: illusions and emotion control. She has a rebellious fashion sense, a sarcastic demeanor, and a constant slight shimmer. She joined the AEON After-School Alliance for At-Risk Supers and butted heads with its handler, AEON Agent Rockwell.

When she accompanied her friend Mephista to a meeting with the demonic law firm Ozroch, Ozroch, & Ozroch, she tried to trick the demon and ended up signing a contract with them, agreeing to collect purpureous brimstone in exchange for heightened powers. When she created illusionary demonic horns and spikes to attack crime boss Mr. Hearse, she found the demonic accoutrements became permanent. She resolved to worry about that later and focused on flinging Mr. Hearse through a portal to hell.

Moxy was a PC in Alexi Sargeant's Masks game in May 2019, played by Pearl.

Moxy is not to be confused with Miss Moxie, a member of the Golden Age hero group the Allied Angels.