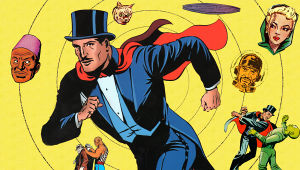 Wildcard's former teacher who gave him the boot for being lazy and thoughtless. Mortigern had some interest in the Catseye jewel that Lynx had. Mortigern is a traditionalist wizard cut from an old world aristocrat's cloth. Even though he is a stickler for tradition, he does have a soft spot for the weird, the odd, and the somewhat outrageous. That will sometimes mean that he works hard on their behalf and sometimes means he gives them a harder time because he knows they can be better. Even as hidebound as he is, he did change his program for dealing with summoning and summoned entities after some rather pointed criticism from Wildcard about the dubious morality of forcing spirits into what amounted to indentured servitude.

Mortigern now teaches Charms at Hedgewick Academy, where he is the head of House Burrowdown. On one scary occasion, he was impersonated by the dark wizard Adriel so that Adriel could gain access to the school and Coven Prime for reasons unknown.