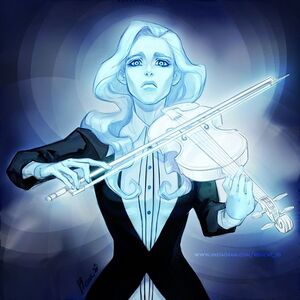 Moonlight Sonata was raised as a sibling to Red Bear, a fellow ward of Iron Bear within the Soviet super soldier programs affiliated with the KBI. Sonata defected from the Soviets under the influence of Agent Rockwell of AEON. In New Gauntlet City, she appeared to be affiliated with the sinister Twilight Orchestra, earning the distrust of Ghost Arm Disciple.

Where exactly Sonata's ultimate loyalties lie is a vexed question, but her confessed aim in entering The Celestial Tournament was to take down Mother Steel, take over the Celestial Mountain, and "dictate the terms of world peace." She was stymied by Ghost Arm Disciple and Sable Tigresa joining forces to defeat her when she ambushed them outside the arena—this lead to her being disqualified from the tournament. Then her machinations were pre-empted by a conspiracy among AEON, the KBI, and Joseph Robertson Sound, Jr. to blow up the mountain. She assisted her erstwhile estranged brother Red Bear to defuse the explosives and save Dancing Panther from plummeting off the mountain.