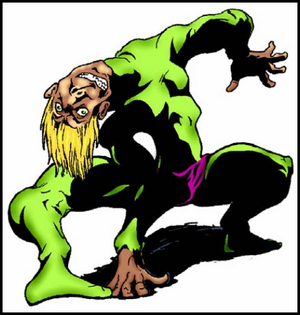 Some people are born to be superheroes. Selfless, noble and brave, blessed with an innate sense of fairness and justice, they may take up the cape even if they don’t have any special powers. Mister Twisted was never that kind of guy. His superhuman abilities haven’t made a hero out of him, despite his best efforts. He’s shallow, petty and not terribly bright. Driven to seek success, and cursed with an enormous ego, he’s incredibly jealous and vain.

He speaks in a kind of fake skatepunk slang that he’s picked up from commercials and Saturday morning cartoons, and which was already out of date when he started using it in the nineties. He particularly overuses the word “extreme” and heroes who have worked with him say it makes him embarrassing to be around.

He’s the son of the late “Mister Amazing” whose exploits thrilled the world in the 1960s, and he grew up in the superhero community. He was admitted to the “Street Saviors” partly because of his father’s reputation and partly because he had inherited enough money to be one of its major sponsors. When half their members resigned he was the closest thing they had left to a leader and became the de-facto head of the team. Mister Twisted was not up to the challenge of leading the group. The only mission he had the chance to organize was a sickening disaster, and caused the team’s final dissolution in a flurry of lawsuits.

In the years since Justice Xtreme fell apart, he has sulked on his father’s estate, bitterly nursing his anger. But you would never know he’s brooding if you spoke to him. He remains as outwardly cheery, upbeat and enthusiastic as ever. He says that Justice Xtreme will be back soon, with an extreme new lineup of extreme new heroes for an extreme new world. In the meantime he’s pursuing other projects. If you ask him what those other projects are his mood darkens. The truth is that no one wants to work with him anymore, his father’s business empire is slowly falling apart and his life has gone completely to hell.