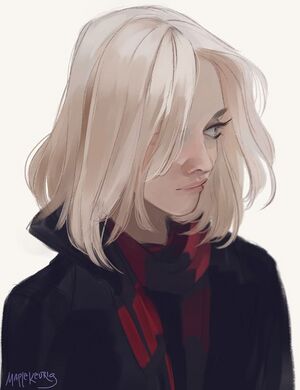 "Melody Chambers," Mel to friends, is a superpowered teenager incarcerated within New Guard Academy. She possesses a psychokinetic voice, an ability to replicate any kind of noise or music using simply her voice. She also happens to be the subject of a prophecy involving the end of the world. Oops.

Her birth was engineered by the Twilight Orchestra, a shadowy cult trying to bring about the sleep of humanity. As such, her life has been a revolving door of foster families, moving from city to city, as the cult tries to safeguard her until the time has come for her to sing her song. She's become kind of fed up about it.

Ended up in New Guard Academy after having seemingly been sold out. New Guard seemed to be quite interested in her voice and tried various means to bring it out of her. The Twilight Orchestra soon broke her and her friends out and placed them in a new school somewhere in New Gauntlet City.

Has a recurring dream of a normal life, complete with mom and twin sister.

Mel was a PC in Rich Rogers's Monsterhearts 2 game, in October 2019. She was played as The Devil by Leandro Pondoc.