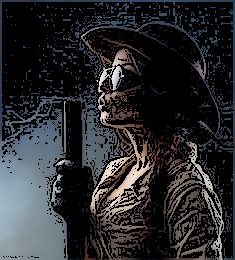 Marshal Theodora is a social media sensation who first appeared publicly after she infiltrated an incarnation of The Ringmaster's circus as "Annie Smokely". This led to a very public arrest. When asked about her powers, Theodora often replies, "I caught a wildfire spirit in the desert with my lariat and bent it to my will." The police at Precinct 13 are allies and lean on her for supernatural help from time to time.

Theodora's hands are black, moving up her arms in lighter gradients. She normally wears a duster with elaborate flame-styled embroidery. She keeps long-handled lighters in the holsters at her hips.

Theodora is currently on a team with Harvester, Hashtag, Kid Reactor, and Pillar.

Theodora was a PC in Rich Rogers's Masks game in January 2019, played by Jason Cox.