Gauntlet Comics is a shared universe for the Gauntlet gaming community. Tabletop RPG sessions are default set in New Gauntlet City. NGC is a setting with superheroes and supervillains, but Gauntlet Comics also has room for other genres. We've had sessions of superpowered RPGs like Masks: A New Generation, Hit the Streets: Defend the Block, Blazon, and With Great Power: Master Edition. We've also had sessions of My Life With Master, The Ward, Demigods PbtA, Hogwarts RPG and many more.

The ages before the dawn of the super-powered being, ranging from the 1930s and before.

There are five "ages" of super-powered folks in the history of Gauntlet Comics, starting in the 1920s and leading up to today. 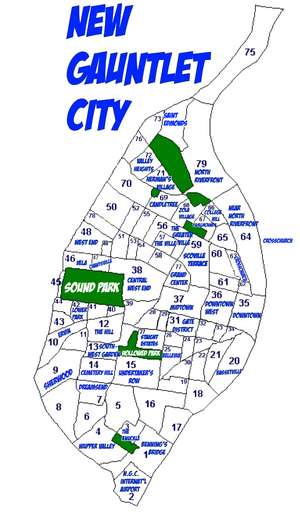 Places to Shop or Eat

The following is a list of many major super-powered or metahuman teams. Most of them are player character groups, but there are some NPC teams, too.

The idea of Generations is taken from the excellent RPG Masks: A New Generation.

There are four generations of super-powered folks in the history of Gauntlet Comics, starting in the 1920s and leading up to today.

For the bureaucrat(s) of this wiki[edit]

Hello, and welcome at your new wiki! Need help? No problem! We will help you with your wiki as needed. To make a start we have added a few links about working with MediaWiki:

Well, that's no problem. Even if something isn't explained in the documentation/FAQ, we still are happy to help you. You can find us here:

Retrieved from "https://gauntletcomics.miraheze.org/w/index.php?title=Main_Page&oldid=1437"
Cookies help us deliver our services. By using our services, you agree to our use of cookies.