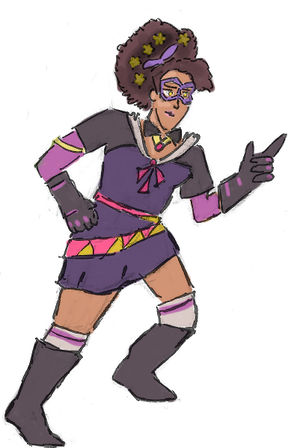 Madeline Odyei, aka Maddie Midnight, was a member of the Allied Angels, a team of young women who fought on the Gauntlet City homefront during World War II. Maddie is the latest in a long line of night-stalking monster hunters (the Odyei)—some of whom do not approve of her taking the legacy in a more superheroic direction. She had superhuman strength, speed, and beauty, but could not yet wield her family's weapons and armors. In the Allied Angels' mission to Urucia, she came face-to-face with her grandfather, Ishmael "Nightstalker" Odyei, who had been turned into an evil vampire and joined the Nazis. Maddie defeated "Count Nightstalker" in an epic battle and finally put her corrupted progenitor to rest.

Maddie Midnight was a PC in Jim Crocker's Masks game in April 2019, played by Chris Newton.