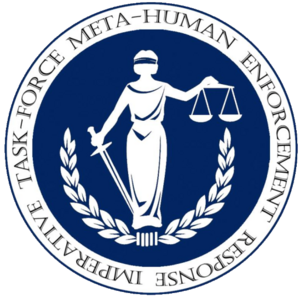 MERIT was founded as a branch of the FBI in 1957 as a response to the threats leveled against the United States by Dr. Damien Structo (Dr. D-Structo for short), in particular the giant squid that rampaged down the streets of New Gauntlet City during that summer. Since its founding, MERIT has tried to curtail most meta-human threats to the US public, and despite limited funding and personnel, they have done a stellar job.

While MERIT does recruit Super Heroes to join its ranks as special operatives, the rank and file of MERIT’s forces is made up of field agents with no super powers. Nevertheless, they are quite formidable as they have received extraordinary training and equipment. If the Heroes are working with MERIT, they’ll likely be interacting with many field agents.

The rank and file of MERIT’s forces are ordinary humans who have received extraordinary training. Recruitment is by invitation only, and only the best are invited to apply. Of those, only one in three finishes field training which includes intense physical and psychological tests. Those who don’t make the cut might still be invited to work for MERIT in another capacity, in the MERIT office, however.