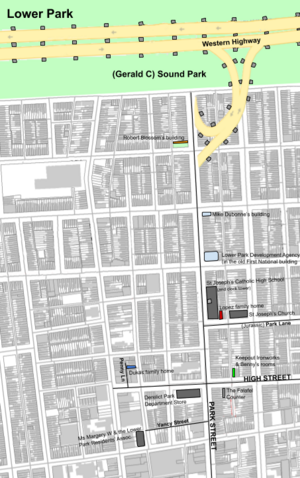 Lower Park was once a highlight of New Gauntlet City with blocks of pristine brownstones built for the middle classes of the late 1890s. Sound Park was laid out on land gifted to the city in 1894 by philanthropist Gerald C Sound as ‘a lung for this city we love’. Sadly, that intention was sacrificed when the Western Freeway was built through (or rather over) its southern edge fifty years later while corrupt Joseph C “Boss Joe” Sound was Mayor. The district clung to its middle-class credentials for a generation but as traffic on the freeway grew those that could moved to quieter, greener, pastures. The trust fund set up to maintain the Park had been stripped by Boss Joe so that it also fell into first disrepair and then disrepute.

Today, Lower Park boasts only the first off-ramp for the Freeway and a cluster of low rent warehouses in its shadow. Most of the brownstones have been left to squatters and ne’er-do-wells; their walls defaced by gang tags and graffiti. This is still a place that people call home, though, and those people deserve protection as much as those living in the downtown high-rises.

The community is, though, pulling together after decades of neglect: former grade school teacher Ms Margery W. administers The Lower Park Resident's Association from a brightly decorated brownstone off Yancy St., while The Lower Park Development Agency, housed in the recently refurbished First National Bank building on Park Street has a high and positive media profile.

Lower Park is defended by an unnamed team of superheroes including:
Hotwire
Young Void
Shadeux
Blink