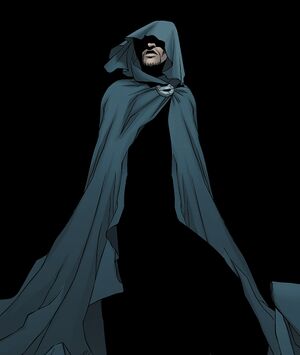 A "classic" capes and monologue-styled supervillain. He can fly and control shadows to create tangible tendrils capable of shearing through metal, as well as having access to gadgetry such as smoke bombs that can cut off sunlight. He took over Randy Rabbit’s Amusement Park and issued several demands. He has a number of minions - "The Things That Go Bump In The Night" - who dress in all black outfits with monstrous black masks and fight with gadgetry such as shock-gloves. He was fought off by the Saint and other young heroes in the Saint Edmonds neighborhood.