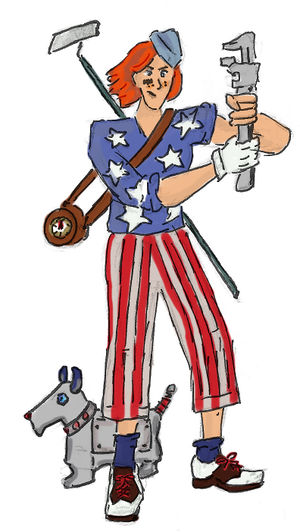 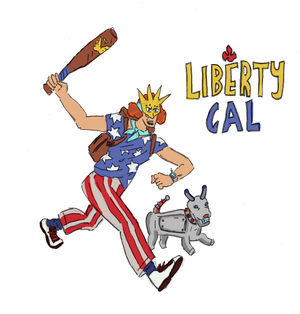 Liberty Gal with her mask

Rosie Rockwell, aka Liberty Gal, is a member of the Allied Angels, a team of young women who fought on the Gauntlet City homefront during World War II. She had no powers and no official training, but was brimming with pluck and patriotism and accompanied by a surprisingly advanced robot dog named Rivets. Rosie flatly rejected anyone who told her she didn't belong on a superhero team, including adult heroes like Silver Swan's mentor Golden Eagle. She did, however, eventually take the advice of her teammates and acquire a mask—one created from the remnants of the statue of an Urucian warrior-queen of old.

Rosie's scrappiness lead to her and Rivets taking plenty of hard knocks, including landing them in the hospital/the scrapheap after a confrontation involving Scrapper and the adult hero Snapshot. Rosie and Rivets both pulled themselves together and returned to (in Rosie's view) lead a later iteration of the Allied Angels, whose lineup meant Rosie clashed repeatedly with the anarchic Raggedy Jan, bonded with the ghostly Phantom Pain, and admired the ingenious Trailblazer.

Liberty Gal was a PC in Jim Crocker's Masks game in April 2019, played by Alexi Sargeant. She returned for Jim's June 2019 Masks game, continuing the same story, and again for the November 2019 Masks game.