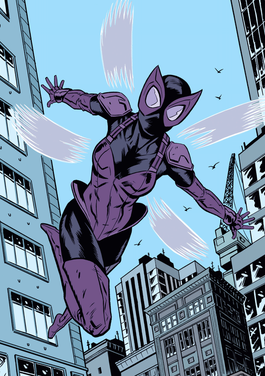 La Escarabaja is the cape name of Vanessa Vargraves, the "Loose Cannon" of the Suber Up team in Bassetville. She goes to college part time. Has a room mate, Fernanda Ferrera. Her father worked at the docks, her sister works at the garment factory. Vanessa herself works part-time at Nerd Herd. Cousin, Tito, is the store manager. It was at Nerd Herd, doing an install on a Neighborhood Watch car that she received her superpowers. Unbeknownst to anyone, the car had been infused with cosmic gamma rays.

La Escarabaja is part of a "Hero for Hire" team along with Araña, Hard Times, and Jaguar.