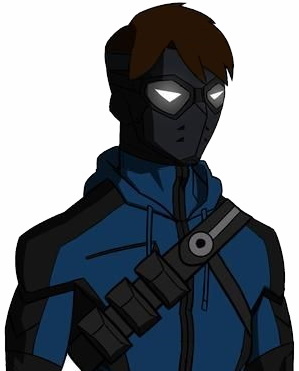 Knockback is the heroic identity of Pryor Pérez. Pryor is the son of super-powered villain Superia, who claims he's in "retirement". Pryor's mother, Lupe, was a Mexican immigrant who worked as a maid in Superia's mcmansion in Saint Edmonds. Superia and Lupe had a brief fling, and Lupe gave birth to Pryor before she "left". Superia says Lupe is back in Mexico somewhere, but Pryor doesn't know where to find her and worries about her all the time.

Pryor's best friend in the world is Chia-Jung.

Due to his father's super-powers, Pryor inherited his own powers. So far, Pryor has discovered he has energy absorption: the ability to draw powerful energies into himself (fire, radiation, sometimes even kinetic force. He's also blessed with incredible dexterity and parkour skills which give him what appears to be impossible mobility.

Knockback was a PC in David Morrison's Masks game in September 2020. He was played by Rich Rogers.