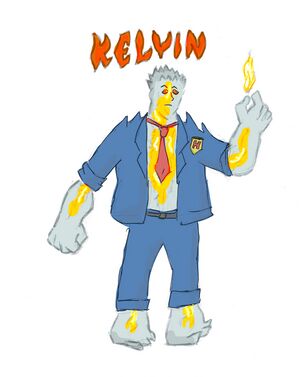 Kelvin is a lava elemental being living in an experimental crystalline containment suit. He attended Hope Prep, first as a science project of Dr. Vivian Hawkray and then as a full student after breaking free from the lab to assist in the gameday prank/interdimensional crisis that formed him, The Pale Prince, E Lane Sobcheck, and Tensile into a team, The Hopefuls. Kelvin is naive and interested in learning more about humanity—he has received a number of lessons that he takes seriously, including not touching flammable people without permission.

Kelvin's origin may be tied to a young Danny Moloka'i playing with his elemental powers.

Kelvin was a PC in Rich Rogers's Masks game in January 2020, played by Alexi Sargeant.