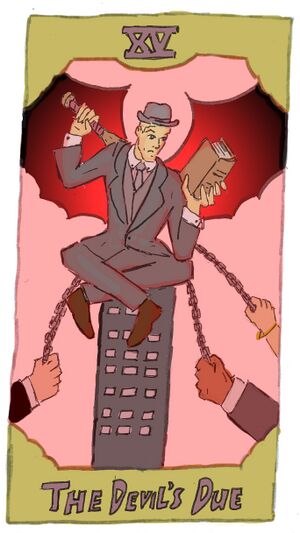 Jeremiah Hunt was an enforcer for the demon law firm Ozroch, Ozroch, and Ozroch and a star of the mature-readers comic series The Devil's Due. During his service to Ozroch, he tried to keep his family relationship to the other Hunts of New Gauntlet City a secret from the demon. Hunt wore old-fashioned clothes and had access to a powerful demon form.

In the Narcosis Comics crossover event "Coven Prime," Jeremiah covertly (and then less covertly) aided Inspector Spectre, Rosalind McDonaugh, and Anna Kogotov against Ozroch's machinations. At the climax, Jeremiah was flying in demon form off the side of Ozroch's skyscraper headquarter when his patron cancelled his contract and left him plummeting towards the ground in human form. Inspector Spectre used the same magic bullet that had killed him and trapped his ghost on earth to “save” his friend—by shooting Jeremiah and trapping him as a ghost on earth as well. Jeremiah became the Vigilant of Wild at the reconstituted Coven Prime, fulfilling a debt he owed to the fae Rosie.