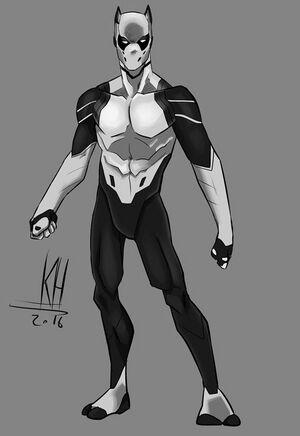 Jaguar is the cape name of Oscar Ortiz, the "Spy" of the Suber Up team in Bassetville. He has a day job as a construction worker. When he becomes Jaguar, he can literally turn into a jaguar. He also possesses supernatural senses. He inherited the Jaguar mantle from a previous Jaguar active in the 70s. He originally used his powers to commit crimes for selfish gains, but made a "face turn" after getting busted by his future teammate, La Escarabaja.

Jaguar is part of a "Hero for Hire" team (Suber Up) along with La Escarabaja, Hard Times, and Araña.

Jaguar was a PC in Rich Rogers's 1%er Supers game in December 2018, played by Xai Causey.

In a Neitherworld where Nuevo Gauntlet City is part of Greater Mexico, a version of Oscar works as a taqueria manager and secret angellero, using his jaguar shapeshifting to hunt predatory angels. He was manipulated by Febe T. Dolár into a dueling a feral hellhound-like angel in an underground fight club. Though he proved victorious, he earned the enmity of the fight club's operator towards him and his angellero crew.

This version of Oscar was a PC in Rich Rogers's Nahual game in September 2019, played by Alexi Sargeant.