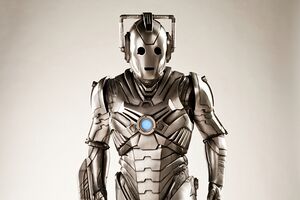 Iron Bear is a Soviet-designed android with vastly complex plans, affiliated with the KBI. He was guardian to the young Red Bear and Moonlight Sonata. Dancing Panther came into possession of a VHS tape purporting to prove Iron Bear was complicit in Moonlight Sonata's defection to the West. Whatever the truth of that, Iron Bear was present in disguise at The Celestial Tournament, conspiring to blow up the mountain with AEON and Joseph Robertson Sound, Jr.. He briefly recruited Red Bear to help rescue Moonlight Sonata, then seemed to try to send both plummeting off the mountain. Red Bear took this apparent betrayal hard. But the full extent of Iron Bear's plans may not yet be known by anyone. He came within inches of claiming the Sword of Legends, only to be foiled by the Sable Tigresa.

In modern times, Iron Bear has been reconstructed and assigned to the Villain Rehabilitation Program run by the Queen of Cups. Here he serves as a waiter at the local cafe, and is attempting to reintegrate himself into Gauntlet City society.