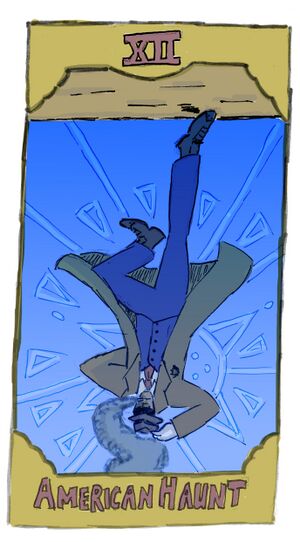 Malachi Spektor (aka Inspector Spectre) is the ghost of a fast-talking private investigator from the 1920s and the star of the mature-readers comic series American Haunt. After finally solving his own murder at the turn of the millennium (in the Narcosis Comics crossover event Coven Prime), Malachi remained in the earthly plane as one of the Vigilants of Coven Prime, representing Night. At the climax of Coven Prime, he used the same magic bullet that had killed him and trapped his ghost on earth to “save” his friend Jeremiah Hunt, who was plummeting from a skyscraper—by shooting Jeremiah and trapping him as a ghost on earth as well. Jeremiah became the Vigilant of Wild at the reconstituted Coven Prime. The new Vigilant of Mortality is Malachi’s cousin Diamond Ford, a tough old lady who’d been freed from the clutches of Ozroch, Ozroch, and Ozroch.

Inspector Spectre later appeared to help out Hedgewick Academy fifth-year student Adrementitia Grey when she'd be trapped in the catacombs of trials under Coven Prime by a dark wizard impersonating her charms teacher Mortigern Dunwiche.