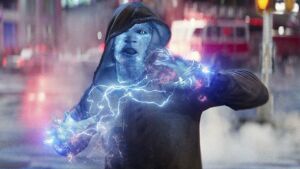 Benjamin 'Benny' Thibodeaux grew up in Lower Park in the school of hard knocks: teenage tearaway, small time criminal, and then henchman to a super villain who carried out experiments on him. That's where he got his power to manipulate electricity for offense and defense. Now in his 40's and working in his cousin Eriq's business making security grills for doors and windows he has more hard experience of super heroes than all his teammates put together, having been on the rough end of a number of encounters with them. He won a suspended sentence when he realized the villain he'd once called boss was out of control and helped lure him into an AEON trap. Now he tries to mentor and guide others to avoid making the mistakes he made. His brother's business is in trouble, though ... in part because of Benny's view that charity begins everywhere BUT home.

Played by Jim Likes Games in Alun R's series of Hit the Street: Defend the Block in March 2020.