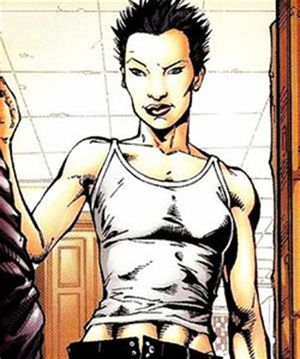 Hikaru, The 28th Champion of Nike, was trained from birth to be a samurai, but rebelled. She ﬂed to a hedonistic life in New Gauntlet City, until, coming home drunk, she saw mob enforcers harassing a couple. She drove them oﬀ, but suﬀered wounds that would have been fatal had it not been for the Goddess choosing her to be that champion.

She dedicated herself to the protection of the weak, and with the help of Axiel, constantly adding cybernetic enhancements to her body to help in the fight against Don Destructo, her nemesis. Hiraku was a noted member of the Legion of Valor.

At some point before her ascension as Champion of Nike, she conceived a child with the god Odin. The boy grew up to a demigod wizard named Colby Hikaru.

Hikaru was created by James Stuart for his RPG Legacies.